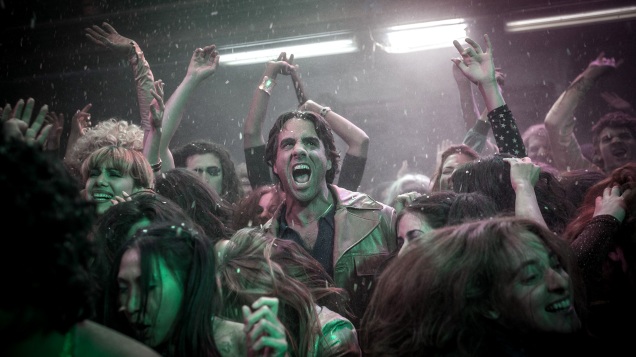 Bobby Cannavale as Richie Finestra in the crazy final scene of episode 1, “Pilot.”

HBO debuted its new show about the record biz in the 70’s, Vinyl, earlier this month and I have only watched the 2-hour pilot episode, but I’m ready to talk. I’m not going to go into all of the deets, but it’s a Martin Scorcese/Mick Jagger/Terence Winter project, starring Bobby Cannavale as the head of the fictional American Century record label, whose artists include Donny Osmond (more on him later.)

The Cast – Especially Cannavale. I’ve always thought he needed a big leading role, and this could be the one.  Everyone is good: Ray Romano, Olivia Wilde, James Jagger, Max Casella, and Juno Temple are just a few.  I am immediately impressed by James Jagger, as he seems to be able to handle the acting as well as the punk singing.

The Set Stylist and Hair/Makeup – The hair and clothes are spot on.  The men are rocking mutton chops, wide collars, long hair or weird Little Lord Fauntleroy haircuts, funky 70’s polyester suits and boots. The chicks are all wearing hippy-flowy or funky outfits with lots of colorful makeup, long straight hair (or with fros or the wild Stevie Nicks frizzy curls, which Juno Temple’s Jamie character makes look just so perfect,) and the correct platform shoes. And pantyhose! (I need to see a L’eggs display at some point in this show’s run.) It’s all pretty close to what it was really like,  unlike the “you almost got it right” stuff on That 70’s Show.  The sets/props seem to look authentic for the times as well.  Browns and golds and oranges are everywhere! And Jamie hoards a vast collection of plastic bags filled with pills, joints, and white powder, like any good record company “sandwich girl” would have on hand to keep the talent happy. 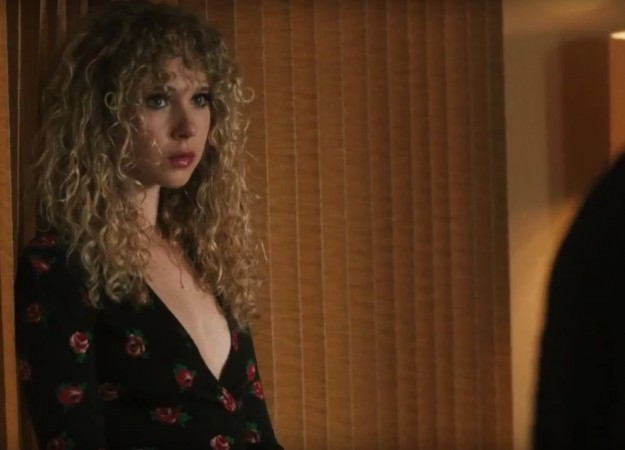 Juno Temple as Jamie Vine in HBO’s Vinyl, with the Stevie Nicks hair and the 70’s boobs.

The Music – Well, of course it is fantastic music. I found a Den of Geek article that covers the soundtrack, and I’m going to keep going back to it, since they are going to review the entire season’s tunes from episode to episode. The pilot included The New York Dolls, Slade, Humble Pie, Otis Redding, The Edgar Winter Group, and more. Even Donny Osmond, whose name gets mentioned over and over as “Donny Fucking Osmond.”  (I loved that.) There is also a fictional band called The Nasty Bits which is an up-and-coming punk band led by Kip Stevens (aforementioned son of Mick Jagger.) Some of the music is background in scenes, but some is presented as performance, with actors taking the parts of the real bands.  The guy who played Robert Plant had the moves, man.

The Not So Good:

The Plot – I’m hoping for improvement, but there is a lot going on here, and without spoiling too much: Germans AND mafia goons AND murder in the pilot, among other things? I can picture that first meeting with Jagger now: Scorcese just HAD to get his mobster schtick worked in somehow.  UPDATE: I’ve watched the series through episode three and, thankfully, it has calmed down since the Scorcese-directed pilot.

The Time Hops – Everyone loves backstory, but this show is hopping every few minutes and it makes it it confusing.  That’s a lot of wig changes.

Overdoing the 70’s – I know it’s one of the things I love; I said so, above. But since the show is set in NYC, must we see every damn thing that happened in NYC in the 70’s, including Andy Warhol taking photos? (I have progressed to episode 2.) Oh, when are we going to run into Mapplethorpe and Patti Smith?  It’s fun to see some of these things, but in this show it’s like a parade of iconic things, and they do divert attention from the plot. Maybe that’s the intent. Short on plot? Throw in Liza Minelli or a building collapse.

Of course I’ll keep watching, if only for the music and the opportunity to relive the 70’s without having to wear bell bottoms and change the channel by getting off the couch.  I think it’s going to be a decent show.  Still,

Share your thoughts if you’ve seen the show. Next new episode airs 28 Feb.